As of this year, 89.9% of office-based physicians use EHRs (Electronic Health Records), yet the associated costs have remained opaque. In this article, we will begin to lift the veil on the direct and indirect costs ophthalmic practices incur for their EHR.

MarsdenAdvisors designed and collected EHR cost survey information from ophthalmic practice administrators, which American Society of Ophthalmic Administrators (ASOA) members contributed to this summer. The practices that completed our survey ranged in size from 1 ophthalmologist to 55 clinicians (both ophthalmologists and optometrists). In total, the respondents represent over 450 clinicians.

Here are our key findings:

A majority use cloud-based EHRs

Coming in above the national all-specialty average, 93% of respondents are using EHR. Of those, 62% use cloud-based EHR as opposed to server-based EHR. The average time with their current EHR was 8.44 years, which makes sense considering many practices adopted EHR due to incentive programs introduced in the last decade.

The budgets for EHR vendors varied widely between cloud-based and server-based EHR, with an average of $13,836 and $6,655 per clinician respectively. This is due to cloud-based EHR vendors including hardware costs in their subscription fees. When you add the average hardware annual budget of $21,524 per clinician for those with server-based EHR, the cost becomes significantly higher. 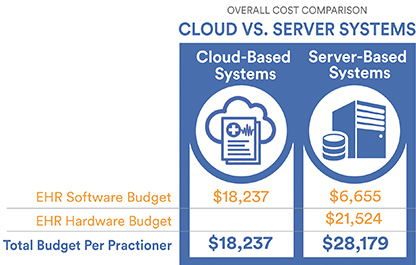 80% of practices who switched EHRs migrated some or all of their clinical data and documents to their new EHR, leaving 20% with no converted information in the new EHR. Of those who did migrate information, 23% were able to convert everything. Cost may also be a factor with not migrating data as the average budget was $3,636 per clinician, and we identified a correlation between practice size and level of data conversion. Nearly three quarters of respondents have some access to old records

Because of the low level of complete data migration to the new EHR, a majority are unfortunately still needing to use (and pay for) their old EHR. Of those requiring continued access to their old EHR, 42%  have full access and are, on average, paying double what practices with read-only access pay. Those who opted for a separate archive application spend under $500 per clinician per year on average, which is slightly lower than those with read-only access to the old EHR.

Practices also continue to deal with paper records. A majority keep paper records locally, while other practices have opted for alternative ways to clear up office space. While meeting record retention laws was the main reason given for maintaining records from prior EHRs, a majority of practices are also using these records for patient care. This includes viewing the old data and documents as well as identifying missing data and preparing charts in the new EHR. The next most common reason was for payer chart requests, followed by various billing tasks. MarsdenAdvisors helps thousands of ophthalmologists switch between EHRs, migrate data, and archive historical information. We have specialty-specific experience to capture as much data as possible, and we advocate on behalf of our clients to get the data they need, that is rightfully theirs. In 2021 we introduced Kyval®, a low-cost archive app to reduce the dependency on historical EHR systems and to drastically reduce overall costs.

If you are in need of assistance in migrating or archiving data, let us know. If you’d like to contribute your experiences to this ongoing study, check out our survey here.

Juliette Walle is a Health Policy Analyst at the consulting firm MarsdenAdvisors.

While Electronic Case Reporting (eCR) has been required under the MIPS Promoting Interoperability category for almost a...

Care communication and coordination have been a centerpiece of recent policy discussions for the Centers for Medicare &...

Get important updates on compliance, EHR optimization, and the latest news.

Get important updates on compliance, EHR optimization, and the latest news.